I’ve used local development environments for as long as I can remember.  They’ve always been a fluid part of being a developer.  The biggest pain point was keeping everything upgraded at all times and switching from one stack to another. In case you didn’t notice, I said ”was”.  This is because in the Spring of […]

For one of the first projects I ever worked on in an agency setting, we had a monster list of items to either finish, ask about, or respond to. A classic punch list. So, I was given this list in a Google Doc. I ambitiously went about attacking this near 80 item list. For things […]

Using WordPress, it’s a poor assumption to assume the wp-content, plugins, and uploads folders are always in the same place, or even always called by those names. The configuration you see above is a sample WordPress root directory. This isn’t uncommon. Many people who manage their installs with version control such as Git probably recognize […]

In terms of free themes, Hueman sure is a knockout. I’m not even much for magazine themes, but if you have a photo-heavy site with plenty of content, I really love the design and feel of this theme. Built by Alexander Agnarson, it appears to have been released November 1st, and was still a couple more […]

As a phrase, this is often more of a conversation killer rather than encouragement for collaboration. The delivery method of this popular phrase is paramount, and the audience needs to be genuinely considered when we say “patches welcome” to those that come forth with recommendations for our products. Let’s use an example Let’s say I […]

Tomorrow I’m extremely fortunate to be speaking at WordCamp Cape Town. One of the points in my presentation is about fighting impostor syndrome. However, It has also come up in one of my many wonderful conversations with Chris Lema, and even came up when an up-and-coming WordPresser was talking to me at the pre-party tonight. […] 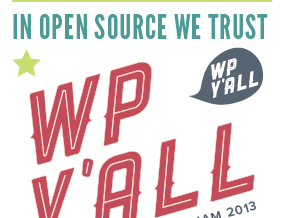 This past weekend, I co-organized WordCamp Birmingham, or WP Y’all, and a couple of our (many) taglines were “In Open Source We Trust” and “Cheers to the GPL.” So naturally we toasted the GPL at the after party. Going through all of the pictures and seeing our toast, I thought about it some more and […]

Web designers tend to be pretty particular about their designs. However, often times, if you watch how end users use a website, it can be surprising when they don’t do things how the designer and developer would expect. Perhaps the client or buyer didn’t have images for a section of the website where you expected […]