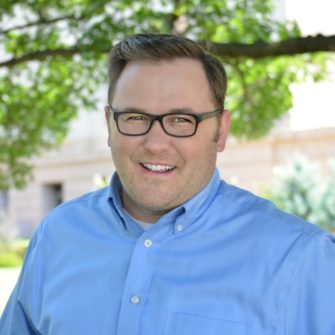 Cory Miller is a passionate entrepreneur who believes in finding and maintaining work happiness that aligns with your purpose and plays to your strengths, talents and ambitions, while challenging you to do great things with your life.

In 2008, he started iThemes, a pioneer in building cutting-edge web design software and training for tens of thousands of customers around the globe.

Over a decade and starting from a home office, Cory grew iThemes into a multi-million dollar enterprise, leading a team of 25+ people, in four countries, with an office headquarters in Oklahoma City.

In 2011, iThemes was named the 7th fastest growing company in Oklahoma City by the Metro 50. That same year, he co-founded The Div, Inc., a nonprofit tech foundation aimed at inspiring and training the next generation of software developers through its kid’s program, Div, Jr.

After a decade of successful business, in January 2018, iThemes was acquired by Liquid Web, a premiere web hosting company, and is now an independent unit within the company.

In January 2020, Cory became a partner at Post Status alongside founder Brian Krogsgard and team.

In addition to being a regular leadership speaker, trainer and writer, he is the co-author of WordPress All-in-One for Dummies (Wiley, 2011).

He is a member and past board member of the Oklahoma chapter of Entrepreneurs’ Organization (EO), a network of over 8,000 entrepreneurs in 40 countries with companies that have revenue over $1 million dollars annually.

Cory has also served as an EO moderator for 3 peer-to-peer “forum” groups and started and seeded two forum groups during his membership.

He is also is a trustee for WP&UP, a nonprofit providing mental health support in the WordPress community.

He is married to Lindsey Miller, who is in grad school to become a mental health counselor. They have an adorable son named Caloway and a little sweetheart daughter named Lillian.

How to read a lot without giving up your personal time — and three books worth reading on business and life.

When Brian broached the subject of stepping aside from his ownership in Post Status about a month ago, a couple of thoughts instantly came to mind…

On April 10th, learn from top experts on client work in the WordPress ecosystem, during Post Status Live — a free event perfect for all consultants.

Enemies are trouble and tear you down. Friends support you and build you up. Building a friendship is not easy, especially when the potential friend could just as easily be your enemy. But it’s a worthwhile endeavor and a lasting investment.