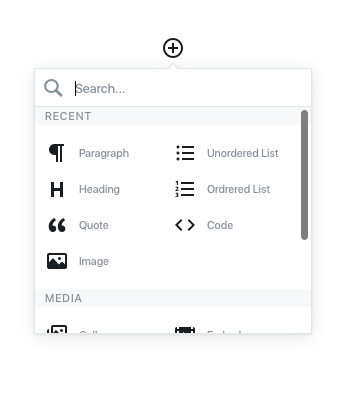 The editor blocks concept is being designed.

An extremely healthy conversation is happening on Make Design around what the behavior should be, and how people may interact with a block-style editor.

I’m really liking the general UI concepts, and most of the shortcut ideas, like using a / for quick-command access. Note that the image above is just an early representation.

One thing that confuses me is the discussion around using one press of the enter/return key versus two for starting new paragraphs. There’s some discussion around trying two presses in a new editor, which makes no sense to me. Asking on Twitter what use case there is for using a line break versus a new paragraph, the response was code and poetry (fitting).

Considering an extreme majority of new-line intent would be for paragraphs, it doesn’t make any sense to me to require hitting enter twice.

Another element I’m curious to see how the discussion evolves is around the buttons in the current WordPress editor above TinyMCE. Right now we have “Add Media” and it’s the most frequent place form plugins and others extend button functionality to.

In the current mockups there seem to be sections of buttons, so perhaps a registration and priority system, like in the customizer, could be utilized.

While I don’t think this design group needs to be thinking through every option for plugin extensibility, it will be important to figure such things out during a later phase of the project.

Also from a technical perspective, Matias Ventura has done a very nice job describing the challenges that must be addressed with a block system. Primarily, defining post_content as a  “source of truth” while also allowing for independent blocks of both static and dynamic data.

Anyway, I like where the discussion is going. I could see this project taking most of the year, but I think WordPress will see enormous gains from a brand new editor and the inevitable technical achievements that will go with it.

John Maeda published his Design in Tech Report for 2018 with an interactive slide version and a straight text version. John focuses on three concepts: classical design, design thinking, and computational design. One of his “key observations” is “Design isn’t just about beauty; it’s about market relevance and meaningful results.” 🎯

Tom McFarlin has yet another great post talking about design patterns in WordPress. There is a time and place for Object Oriented and Procedural approaches.

iA is developing a Markdown-based, radically simplified presentation app (called Presenter) that helps you tell stories effectively. Zed is the spiritual successor to Atom — and focused on fast, collaborative editing. You can get it at GitHub.

We’re giving you two new and compelling reasons to sign up your Team for a Club Membership at Post Status.

Mel Choyce, a WordPress core committer and the designer of Twenty Seventeen, shares thoughts on how good design feedback should be structured. My favorite is probably the last one on the list: Frame feedback as suggestions, not mandates. “What if you…” and “How about if you tried…” are great ways to present alternate ideas to…

At Make WordPress Core there is a discussion taking place about dropping support for Internet Explorer 11 in core. IE 11’s usage is very low by several measures. It would be a great benefit to developers to let it go. Some concerns remain “for those who are unable to upgrade, like financial institutions and education…