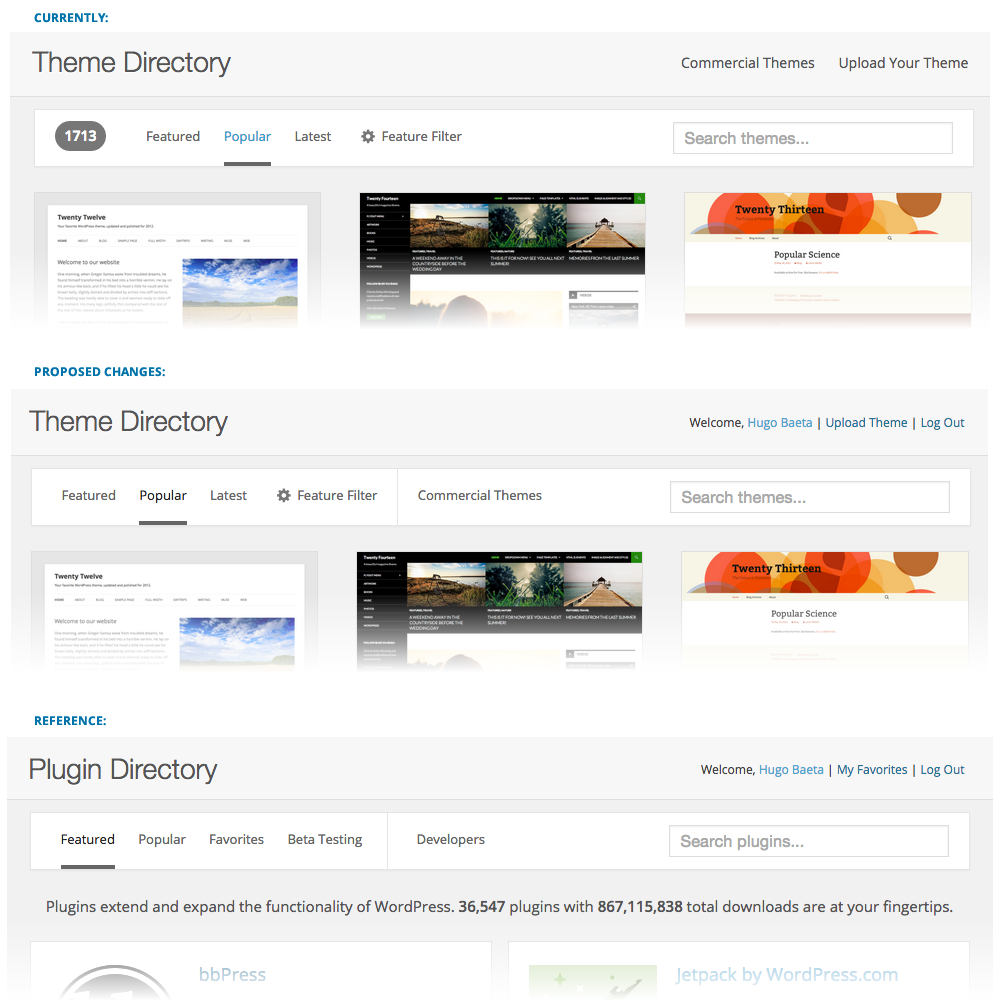 Many commercial theme providers featured on WordPress.org are noting 80%+ drops in referrals. Bill Robbins, of Organized Themes, noted in the WP Tavern comments, “WordPress.org has been a reliable referrer of tens of thousands of dollars a year in sales. I wonder if anything can be done to boost the visibility of that link again.”

The issue was brought up in the WordPress Meta Trac, and project manager Sam Sidler said the following:

Overall, traffic is considerably down on the commercial themes page.
Just to keep a record of the changes on this page:

The former change resulted in ~30% increase in traffic to the commercial themes page (comparing week to week; but still preliminary data). We don’t yet have data on the latter change yet.

Also note that overall “exit” traffic to the page has increased by ~2% since the switch to the new theme directory. This indicates that, when people get there, they are more likely to click through to a theme page.

However, given that traffic is down considerably, the increase from switching links and the increase in “exit” traffic is likely not noticeable to commercial theme shops.

Additionally, Hugo Baeta proposed a design change to bring “Commercial Themes” into more relevance, next to other theme filters: 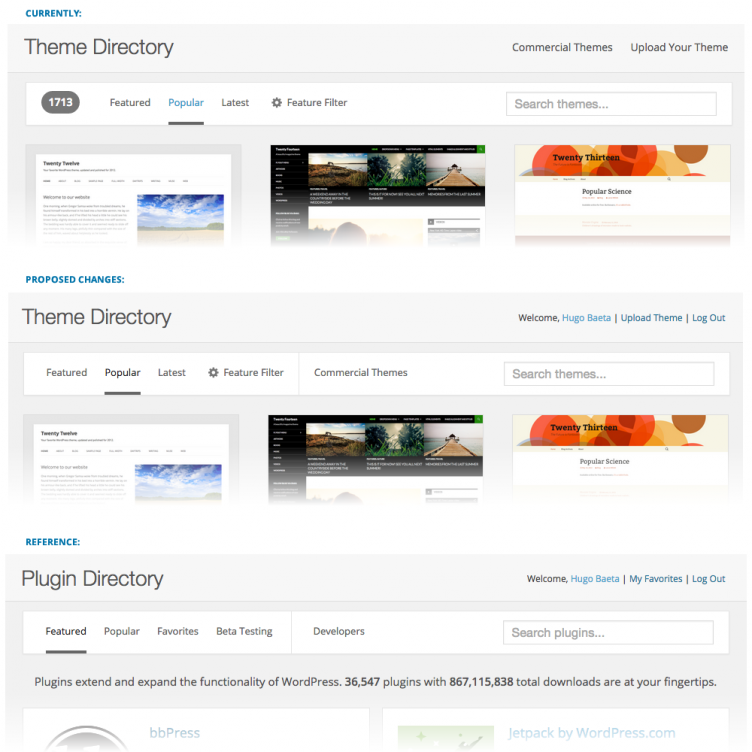 I wrote a blog post last April on the power of WordPress.org on freemium products. The same applies to this situation. Relying on a third party for revenue opportunities is a very dangerous game.

Obviously, I don’t think anyone maliciously wanted to reduce referrals to commercial theme providers, but a small change on WordPress.org has had a huge effect on some theme shops. I am glad, though, to see that the team is open to improvements to make commercial themes more visible.

A note on featured themes

I also had someone email me about how featured themes are chosen. This has been a big debate over the years, as at one point it was quite game-able for folks that were seeking featured status, by reviewing themes.

I confirmed with Konstantin Obenland how a theme gets featured, and it’s very simple, if inelegant: themes that have been updated in the last year are randomly selected to be featured. They’re open to ideas if you have them for making that better.

Automattic has released an interesting new tool, called Postbot. Postbot is a webapp, at Postbot.co, which allows WordPress.com authenticated users to upload photos in bulk and schedule them as posts. There is, of course, a fun little gif. Once I used the WordPress.com connect tool, it instantly let me choose which WordPress.com or Jetpack connected…

Recently, theme updates started getting auto approval on the WordPress.org directory. A couple of theme authors got their themes suspended for not following the rules, and Justin Tadlock writes that the theme team is banking on theme authors to be able to be trusted, to keep this great improvement to the theme workflow alive.

Here’s a roundup of some of the best WordPress and web design eBooks that I have read and enjoyed.

Automattic acquires Day One Automattic has acquired Day One, a free journaling app that has won multiple Apple design awards and is available for most major devices, systems, and browsers. According to Paul Mayne, founder and CEO, work on the app started 10 years ago, and since then it has been downloaded over 15 million…

There is a new WordPress.org naming policy that prevents plugins from using the names of companies and other plugins as the first item in the name and slug. For instance, if a reader submitted, “Post Status Extender Widget” to the repo it wouldn’t be accepted but, “Extender Widget for Post Status” would. Here’s the full text…

Kyle Neath isn’t a fan of Unicorn culture in tech-land. He would like to see more people aim to create what he qualifies as family businesses, and aim for smaller (more niche) customer bases, provide better service, build companies that are good to employees, and grow more slowly. People don’t start hacking on projects anymore, they…