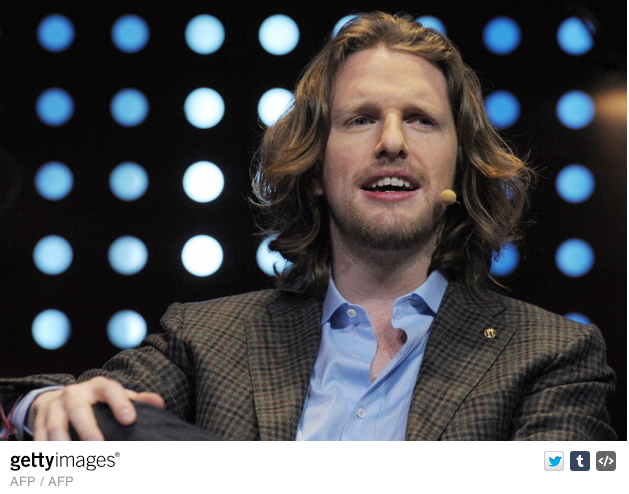 I read an article on The Verge this evening about how Getty Images have made their images freely embeddable. The photo above of Matt Mullenweg is an example.

Getty Images is dropping the watermark for the bulk of its collection, in exchange for an open-embed program that will let users drop in any image they want, as long as the service gets to append a footer at the bottom of the picture with a credit and link to the licensing page. For a small-scale WordPress blog with no photo budget, this looks an awful lot like free stock imagery.

Nice shout-out to “small-scale WordPress” blogs. I guess like the one Time just launched to run their entire website. </tinyrant>

Anyway, I can’t help but feel underwhelmed by this move from Getty.

For one, the implementation is hideous. They call it striking “directly at social sharing.” I call it supremely ugly.

From the overly pronounced Getty logo, to the confusing </> embed icon, to the iframes for Twitter and Tumblr within the Getty iframe (yo dawg, we got iframes for your iframes), the whole thing just stinks. And the image itself permalinks to Getty’s website, of course.

And yeah, it’s not responsive. Somebody needs to get fit-images on this, quick.

All of these things on top of the part where we’re assuming these would actually be easy to implement in WordPress. It’s an iframe. It doesn’t have oEmbed support, so you actually have to drop the iframe code where you want to use it. And forget using these as featured images. These are about as perfect a fit for WordPress as reading an embedded PDF on a website as far as I can tell (hint: I don’t particularly enjoy that experience).

Pay to play, or steal for free

As The Verge author notes, people have been stealing Getty images for years. You can get them royalty free with no watermark off any basic Google image search. And I agree that’s lame. I want photographers to be valued for their work, just as I like to be valued for mine.

Most people (myself included) would probably be willing to pay reasonable fees or give credit if it’s easy to do so. Unfortunately the price to use Getty images would take up most of this site’s, and I’m assuming many other small publications’, budgets just using a handful per month.

What Getty is going after here is data

With the iframe setup, they can keep track of all sorts of user data. They can insert ads; they can meter payments to photographers based on embed stats; they can do a lot of things.

From a business perspective, Getty wins with this move. That data and the potential for ad placement is way better than endlessly struggling with stolen images.

There must be a better way

I think Getty’s idea is good, but their implementation just makes the web worse.

Surely there is a way to let people use their images where both parties benefit, without these gross iframes.

One method that comes to mind would be an Amazon Web Services (AWS) style asset delivery system. In other words, Getty’s website could allow registered members to hotlink their images, and then police the domains the images are allowed on by comparing their server logs to their customer database.

Customers could be charged based on usage, just like AWS or other CDN providers do. But in the case of Getty, the images are preset, with higher usage rates to pay for the photographer’s work. We can call it the Spotification of photos.

That idea came to me based on about five minutes of thought, and could have tons of holes or problems, but surely — surely! — there is something better than what Getty rolled out today.

Envato is expanding operations to the United States, with an official incorporation. Many large companies do this, where they are registered in their home country, and again in large business centers. The US is a huge business center for Envato (both for sellers and buyers), and the incorporation allows them a number of privileges. Along…

WordPress 4.2.2 was released this evening in order to protect against a critical security bug in Genericons. From the release post: The Genericons icon font package, which is used in a number of popular themes and plugins, contained an HTML file vulnerable to a cross-site scripting attack. All affected themes and plugins hosted on WordPress.org…

Noted speaker and podcaster Sarah Parmenter noted on a recent episode of “Happy Monday” that building anything other than a blog in WordPress is something of a “hack.” In her response post, Tracy Rotton argues that it isn’t: The fact that WordPress started its existence as a blogging platform and grown into something more is…

WordPress 5.2.3 is out. It’s a security and maintenance release that includes 29 fixes and enhancements, including an update of jQuery for older versions of WordPress. ✨

Siobhan McKeown shares an epic post on Smashing Magazine on how beginners can get ramped up quickly in WordPress. The community wisdom is truly highlighted here.

Philip is the Team Lead for Automattic’s Theme Team, and he’s the focus of WordPress.com’s “Five Minutes with” series this week. I personally admire the work that Philip does, and it’s a pleasure to get to know him a little bit better in this short interview.