Term meta is one of the most requested developer features for WordPress. When architecting a site’s data, most of us have likely had a desire for term meta to add additional text fields, term images, term ordering, or some other data not in the current schema. WordPress 4.3 included the “third leg” of the taxonomy roadmap, […]

John James Jacoby has released two plugins that make managing more advanced taxonomy use cases simpler. WP Term Order and WP Term Meta do exactly what you’d think, and they do it well. If either of these features make it to core — and I hope they do — then John’s implementation is a good […]

Term meta has been committed to core in changeset 34529. This is a hugely anticipated change, and will excited a whole lot of developers. I’ve covered term meta a good bit the last several weeks, so I’ll spare the justifications. Instead, I’m sharing the commit message! It actually does a great job on telling us […]

Justin Tadlock has a classic Justin Tadlock tutorial. I loved these back in the day. I learned the fundamentals of using CPTs, taxonomies, widgets, and more from Justin. If you read one thing this weekend, make it his latest tutorial on using the new term meta capabilities. I’m going to walk you through building a […]

WordPress 4.3 completed the three-release process of eliminated shared terms, and it marked an important step to allow future term feature development and API simplification. Today, Boone Gorges expertly and simply (two things that are hard to combine) explained how that is so and what is now possible. This means that, by the time WordPress […]

The REST API is a hot topic of conversation right now. I spent 3,000 words verbalizing my opinion on it, but there is a lot of good stuff that smart folks have written about the API and its current state. I want to collect some of these and summarize the positions. As you Post Status […]

There are a few roadmaps and active core components that are worth keeping an eye on right now. I figured I’d just lump them together: Preparing your plugins and client sites for term meta Term meta basically got a “clear to go” message in today’s dev chat. That is awesome, and now it’s important that […]

New Tools 🛠️ WPOnion is a framework that “helps developers build custom meta boxes and custom fields in WordPress.” The documentation goes into further detail, stating its support for not only post_meta but also term_meta, user_meta, comment_meta, settings pages and custom tables. Justin Tadlock announced the official 1.0 release of two feature projects for anyone […] 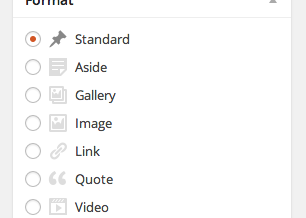 Two themes were released in the last few days by a couple of theme shops I hugely respect: Bailey by The Theme Foundry (above) and Designer by Array (below). Both themes are for portfolio websites, and both themes use a custom post type for the portfolio. What’s interesting, is that both themes are offering support […]

Not all of these are new, but they are new to me. Here are several interesting plugins I’ve discovered recently: The Mozilla web apps team has released a free plugin called Offline Content that uses the Service Workers API and browser’s Cache API to allow your users to access — as the name indicates — […]

Readers know that the WordPress REST API has had a lot of activity this release cycle. There has been a concerted effort to get the API ready for a core merge in 4.7. The release isn’t slated until December, but due to the timelines for feature freezes and testing involved, that means the merge proposal […]